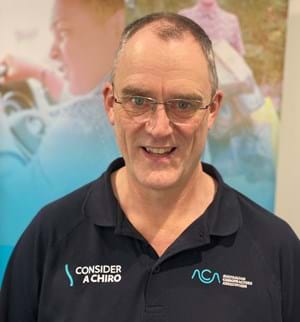 Dr. Geoff McCann is a graduate of the Sydney College of Chiropractic in 1990 and has practiced in Adelaide since later in that year. He is the proud father of two grown up daughters, likes to walk and run and climb Mount Lofty for exercise, and enjoys time playing music. He is also a member of his local church and sees life as a journey of growth in the context of his beliefs. Chiropractically speaking, he loves to see people living happier, healthier lives as a result of their care, and he enjoys the day to day banter as he communicates with patients about their condition, their care and progress and often life in general.

Since returning to South Australia in  late1990, Dr McCann has been involved in a number of roles in the profession with time spent on the Board of the CAA(SA), taking the role of Secretary for part of that time. He has also worked with the Chiropractors and Osteopaths Regsitration Board of South Australia, as a consultant in relation to Compulsory Third Party insurance claims, as a Board approved mentor for a time and in other consultative roles.

Professionally he has taken a proactive approach to developing skills in the application of Cox Flexion Distraction. This has involved multiple visits to the USA for training seminars and the acquisition of the AMAZING Cox 8 Flexion distraction table - well two of them actually.

Well to be completely honest they're a little shy, but we're planning to get together soon, and take a group shot so you'll be able to familiarise yourself with their smiling faces......... watch this space